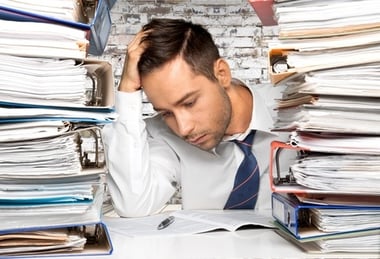 Businesses deal with all kinds of operational costs. Some of these are much easier to cut out than others. While most focus on the largest types of corporate expenditure, there’s one costly item that often remains out of the equation. This costly item is office paper.

Paper Waste in the Office: Some Numbers

Many countries have statistics about the massive waste resulting from the excessive use of paper in the corporate world. The average office worker in the UK uses 10,000 sheets of paper per year! This means that each person in the country consumes paper that’s the equivalent of 4.48 trees.

When it comes to Canada, nearly six million tons of paper are used per year. It’s estimated that approximately 95 percent of office data is still stored on paper, which contributes to massive waste and chaos at the office.

The Financial Implications of Office Paper Use

As you can see, the numbers paint a rather bleak picture. Most offices are still heavily-dependent on the use of printing and writing paper. A paperless office is becoming increasingly trendy but some businesses have been slow to make the transition.

The true cost of paper usage goes beyond the amount that a company invests in the purchase of the supply. Various additional costs have to be taken in consideration, when it comes to storing data on paper and using this method for communication.

The cost of sending information on paper can reach approximately 31 times the original sum invested in the purchase of the supply. A number of other expenses contribute to this massive sum – printing costs, filing, shipping costs, recycling costs, etc. Thus, the price of the sheet itself is only the first step in a series of processes that contribute to massive financial losses.

You may still lack an idea about the scope of the financial losses stemming from the use of office paper. A white paper called Beneath the Surface: The True Cost of Enterprise Printing suggests that anywhere between one and three percent of an organisation’s budget goes towards printing costs. That’s a massive percentage for such an old-school process that can easily be replaced.

The good news is that an alternative exists and making the office paperless has become easier than ever. For a start, a company should consider the integration of a digital document management system. On top of putting an end to the waste, such a solution can guarantee the safety of sensitive data, effortless sharing and collaboration.

Once the system is in place, it would be time to identify the documents that can be replaced with digital copies. Usually, most of the printed information can be transformed to digital data. Next, the corporate team should encourage the use of such a system through proper employee training and incentives. While this process will require some time, it can lead to a massive reduction in paper waste and a change in the image of the company.

So many businesses waste money and resources on paper – paper that they don’t really need. Breaking old habits will usually require time but since a great alternative is already here, making the transition can be a relatively simple task.