A brief history of paper to digital documentation

Startups do things digitally. But companies that have been around for decades largely don’t. It seems impossible to believe, but 82% of companies are still paper-based.

“With all the lip service paid to innovation, it’s astounding that most businesses still use technology invented more than 2,000 years ago. We’ve entered the era of 3D printing, artificial intelligence, and missions to Mars — yet only 18 percent of companies consider themselves paperless.”

With cloud servers and apps like Monday, Trello, and Evernote replacing paper calendars, notebooks, and whiteboards, it seems crazy to think that less than 20% of all companies in 2020 operate digitally. Not so crazy, though, when you consider that computers weren’t even part of the office environment 40 years ago.

Let’s take a look at the brief history of paper to digital documentation and nail down when paper processes will finally go digital. 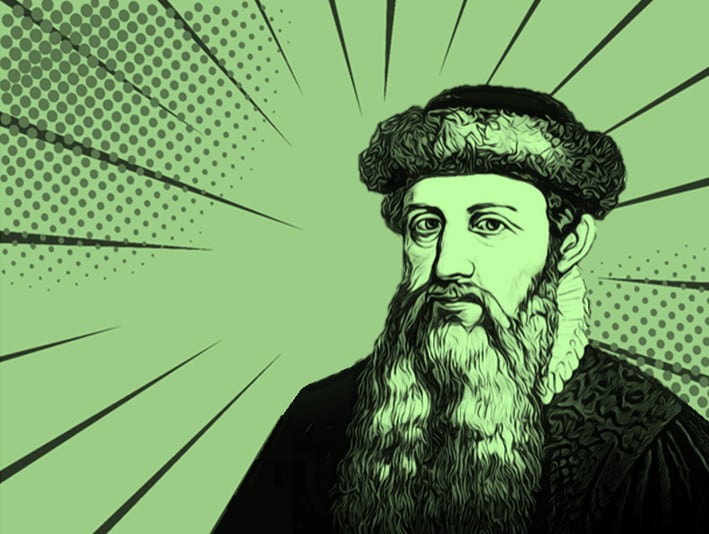 Egyptians created the first form of paper, papyrus 5000 years ago. Fast forward 3000 years and paper was invented in China in 100BC, which quickly replaced papyrus because it was quicker and cheaper to make. Ink soaked into paper (with papyrus, ink sat on top), making contracts more secure.

Fast forward to 1440 when Johannes Gutenberg created the printing press, the first efficient way to make copies with moveable typeset. Gutenberg birthed the printing revolution and catapulted the advancement of communication around the world. In 1938 the press becomes portable, small, and affordable when Seattle inventor Chester Carlson invented the first printer, called the Xerox. In 1968 the dot matrix printer was born, followed by the laser printer in 1969.

Computers have been part of the office mainstream since the 1980s. Adopting computers in the office was commonplace by the 1990s. Most businesses used computers for word processing and accounting and clunky desktop printers to print documents, store them in folders, and file them in cabinets.

By the end of the 1990s, the world wide web (www) offered useable bandwidth and the internet became a functional tool of the workplace. Right around this time, in 1993, Adobe gave the world the PDF, a universal Portable Document Format. PDFs made sharing and viewing files easy regardless of operating system or software.

Around the turn of the century, server capabilities advanced to the point where it made more sense to store files in digital folders than in gigantic metal cabinets. No need to keep printing documents and cutting down the rainforests, right?

Servers weren’t cloud-based and, along with a general mistrust of digital, if a server went down, intellectual property could be lost forever without a paper backup copy. Things weren’t where they needed to be for businesses to jump in with digital.

So when did we hit that magical date when digital could be trusted?

Cloud computing wasn’t even a term until 2006 when Google CEO Eric Schmidt used it for the first time at an industry conference. That same year, Amazon launched web services and Google launched Google Docs and Google Sheets, internet-based programs that could be created, updated, and shared online. In 2007, Netflix launched video streaming using the cloud. Binge-watching may take credit for making the cloud a cozy thing. It wasn’t until 2011 that IBM and Apple launched their cloud services. The next year, Oracle Cloud introduced Software as a Service (SaaS) to the world. But it wasn’t until 2014 that Cloud Computing put a focus on security.

"Cloud security has advanced significantly [and] now provides protection comparable to traditional IT security systems. This includes the protection of critical information from accidental deletion, theft, and data leakage. Having said that, security is, and may always be, the primary concern of most Cloud users." (A Brief History of Cloud Computing)

If we use 2014 as the year that Cloud services went from obscurity to becoming a secure useable system of the modern enterprise, we’ve only been in a position to go safely paperless for six years. So it’s really not that hard to fathom that most businesses haven’t made the switch from paper to digital.

But six years removed or not, there are too many disadvantages to staying that way. It’s 2020 and the only excuse for not “going paperless” is the dip in productivity that happens during the conversion from paper to digital. But outsourcing that conversion to a document management company keeps you up and running as you realize the benefits of a digital system in the background.

Contact MES to help bring you up to speed. It's time to go paperless.